So tonight i can finally get round to uploading my set from Eclecticity last month. I blame Chris for taking so long! Although to be fair he has done a really good job of converting the set and keeping the audio quality at a good level (it’s around 260 kbps). Before anyone gets the wrong idea and thinks this is actually the live gig audio, it’s not. It hasn’t been a miked up recording and caught audience noise, buzzing bass and crackly beats and all the other crap that comes along with it. No, what he done was simply record my set through Traktor while i was playing . So it’s a perfect, clear and audible version. Anyone who uses Traktor will know that it only deals in wav files when it comes to the recording function so these files have been converted to MP3 and Chris has very kindly chopped what was a 4 hour set into 1 hour or so sections. This will allow me to burn them onto discs and also make downloads easier. 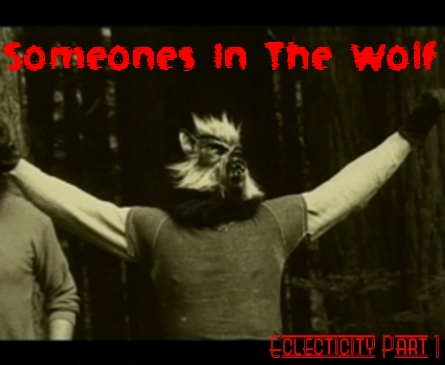 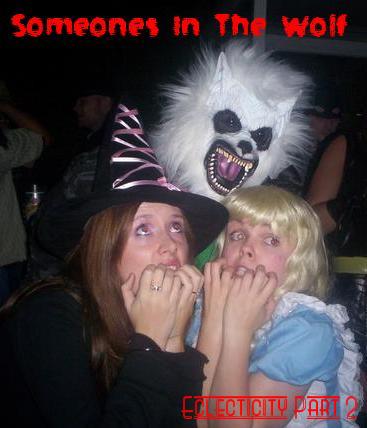 Parts 3 and 4 will go up next weekend.

So,  this weekend was fun.

It’s not every weekend that you get the chance of gigs, parties, more gigs and more parties but this was one of those weekends and i made sure i enjoyed it to the full. I am however suffering for it now. Major hangover. I’ll need to recharge my batteries for the HEALTH gig at The Arches tomorrow night but right now the dust is just starting to settle after days of chaos and i’m gonna relax by lying up on the couch and watching Oddsac. Been aching to get my hands on it for months now and today i finally did.

But first let me tell you about Eclecticity 2010. 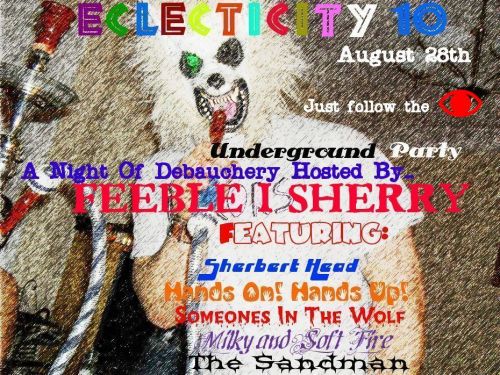 Think of it as an “underground party”. It’s an event that’s held every year (this year was my first, cherry officially now popped!) in the East/Central area of Scotland. It t. Over the years it has taken place in garage workshops, abandoned buildings, industrial estates, warehouses and even some brave/idiotic persons one bedroom flat! This year was a warehouse party. The exact location isn’t allowed to be disclosed. You see, it’s an “illegal” party that starts at 8pm and goes on until all hours of the morning. Usually ending around 6 or 7am. As you can imagine it gets quite messy and chaotic the later it goes on. Apparently the authorities have uncovered it before, 2007 and 2008 if legend is to be believed, and put an end to it.

This year flyers (i’m in the picture! :D) were handed out around pubs and clubs with instructions to follow an eye, much in the style of the BB one, around the town which will then eventually lead you to the venue. Pretty cryptic huh? Pretty dangerous too if you ask me but hey i’m not the organiser i was only playing at it so what can i do.

We arrived at the venue around 9pm, the place was already packed. Sweat filled t-shirts bobbing around to a pre-show soundtrack of Bloody Beetroots, Proxy, Fake Blood and Boys Noize. Thumbs up to whoever compiled that.

We went through to the “backstage” area, a small room no bigger than a hut, and had a few drinks. These parties are always strictly “Bring Your Own Booze” so myself and Chris had bought a case of Red Stripe and a fair few of those really cool mini cans of Jack Daniels. Believe me i needed the alcohol for some Dutch courage before i took to the “stage”. The DJ area was a small block built out of someones computer desk and what looks like the remains of a discarded wardrobe. Small, stuffy but enjoyable nonetheless. Bearing in mind that i’m still not too experienced at this whole live DJing malarky on my own (can count how many i’ve played without Chris in one hand!) Chris agreed to stand up with me, or linger around as he called it, for the first hour or so of my set until i got settled in. I was unbelievably nervous beforehand so was glad of the his presence and experience for the first hour or so. After that it was all go though. Not even a glitchy smoke machine could stop me! Those who were there will know what i mean 🙂

Chris has very kindly recorded my set from the party using his Virtual DJ software and is in the process of converting the file and breaking it up into 1 hour 20 minute sections (it’s originally over 3 hours long) that will allow me to put the whole set onto cd format. Hopefully it’ll span over 3 cds, maybe 4 that i can give to friends and family. But as soon as he’s given me the files i’ll get them uploaded to mediafire and available for free download.

In the meantime, here’s some of the tracks i dropped into my set.

It was a very eclectic set with tracks ranging from synth pop to shoegaze (used HTRK as an intro track), glitch to electro, techno to dub, bass heavy to chilled out, originals to remixes and cut ups and a whole host of other good stuff inbetween. Expect the full setlist and downloads to be up next weekend in the “Weekend Mixtape” section. If you’re listening Chris…..that’s a hint! No, actually, it’s a deadline!

The party itself was certainly an experience. So much so in fact that it’s one i’d be happy to leave untouched. By that i mean that i probably won’t play another one of these nights. I’ll leave that to Chris/Sherbert Head and the rest of the professional “Ill Eagles” as they call themselves. There’s another underground event again at the end of the year and i’ve been asked to play. I’m considering it just now but i think i’ll politely decline. I really am a bag of nerves/embarrasment when it comes to the whole playing live thing, so much so that i need a wolf mask to hide me! Even when i played guitar live with my old band i would stand at the back with my hood up. People will probably see that as ignorance or arrogance but it really is a curse. I would change it if i could. But for now i’ll stick to being a bedroom DJ and musician. Speaking of which, i’ve been recording some new instrumental material recently, just me, my laptop, my guitar and my delay pedal. 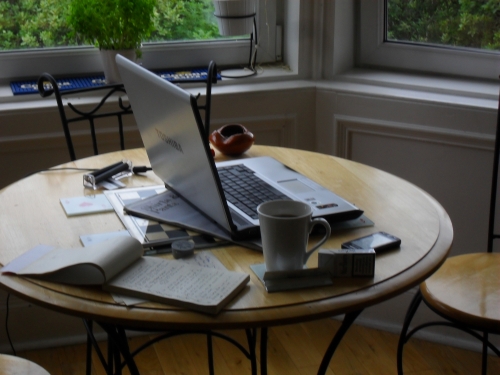