Tag Archives: bring me the horizon

Apparently, i swear too fucking much…

According to friends i use the word “fuck” way too much in every day life.

Examples i’ve been given…

Obviously i use other swear words but apparently “fuck” and it’s various usages are my favourite. So here’s a fucking Monday List with a twist. Well make that two Monday Lists for the price of one. I had so much fucking fun making up a List with “fuck” in the song title that i thought i’d make another one up with swear words/insults in the bands name.

MP3: My Vitriol – Game Of Pricks

I thinking swearing is maybe a Scottish trait and is in our blood. We don’t mean any harm or offence by it. It’s just crept it’s way into out day to day language. We just fucking embrace it i suppose.

Fuck Off Machete – What’s The Signal?

And lastly, my hero…

…….so it’s been a while since the last mixtape was posted. Just 3 weeks short of 6 months to be precise. I hope this one can make up for it.

The original idea for this mixtape was to make a glitch effort but once i had whittled down my tracklist it turned into a kinda best of 65daysofstatic and LOD with a bunch of Bring Me The Horizon remix versions and a few other tracks that just seemed to fit. I made it a while ago now, like March or something. My friends and a small gathering of drunken people at an underground nightclub are the only ones to have heard it. It’s not my most inventive mix yet but it is one of my favourites that i’ve put together so far. 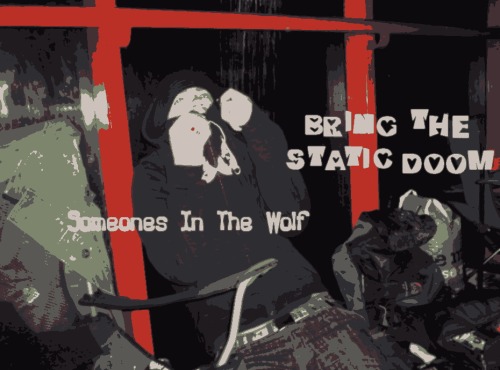 The mix begins with John Cusack  introducing (scene from High Fidelity) over a guitar loop from “Death Breath” and kicks into an hour and seventeen minutes of noise. Some breakbeat, some techno, electro, a pinch of glitch, maybe even some indie/punk, a pop princess or two, some sheer white noise, a bit of gabba, a few mash ups, a few oldies, a few new tracks and just for good measure a little appearance from Albert Einstein.

The main contributions come from:-

Bring Me The Horizon
65DaysofStatic
Legion Of Doom

The other artists/remixers in order of appearance are :-

I’ll try not to leave it so long between mixtapes next time.

Last Friday me and my friends Simon and Morgan were driving through to Edinburgh to see Emalkay play a set at the Cabaret Voltaire. The journey was laced with dirty jokes, humorous discussions on which member of S Club 7 was the hottest (none in my opinion) and just general random banter. Morgan seems to have some obsession with trying to find out if i currently have a “thing” for anyone. By “thing” i assume she means someone i like. “You should find a girlfriend!” she shrieks, piercing my eardrum. Even though i’m sitting right next to her in the car. I, of course, keep schtum, like a gentleman should and simply offer a “yeah, actually, there is someone i really like but i’m not telling you” cos i know that’ll irritate her just that teensy bit more! Simon on the other hand freely discusses how and who he spent the previous weekend with. As he always does. Don’t you Simon? You man whore.

Anyway the journey wasn’t just filled with inquisitive minds and stories of indulgence. It was also soundtracked by some pretty fucking amazing music. On the way there we had a mixtape that Si and myself had put together a few days beforehand. It consisted of mainly of ambient chillout music so we quickly swapped for one that i had hastily assembled just half an hour before we left for Edinburgh. It contained some Aphex Twin, Beetroots, Blue Mars, Skream, NIN, Fake Blood and of course the man we were on our way to see, Emalkay.

The gig itself was awesome. Loud, smokey, wonky, glitchy, bassy, scratchy. You know that feeling when you can feel the bass come through your feet? Well imagine that ten fold. Just what i’d hoped for. After the gig and one too many tequila it was back to the car. I genuinely felt sorry for Morgan as she had to drive an inebriated Simon and i all the way back to Glasgow whilst listening to us have a drunken but friendly disagreement about how good/shit Team Sleep are. Just for the record i’m the one who thinks they’re good. In the midst of this verbal battle Morgan had managed to somehow slip the Bring Me The Horizon “Suicide Season” album into her sound system. I didn’t even notice at first. To be honest, they’re a band that i knew about but had never actually heard anything of. Their image and reputation had kinda put me off if truth be told. But i slowly warmed to it. Bit by bit, riff by riff i was converted. One song in particlar stuck out like a sore thumb, “Death Breath”. The opening riff (and main riff throughout) chugs along like a sledgehammer. Josh Homme would be proud. That was my initial thought actually. A few of the riffs could be QOTSA-esque. A lot of bands would kill for an opening riff like that. So after we managed to get through the full “Suicide Season” album i announced, in a drunken state, “I’m gonna *hiccup* download that album *hiccup* in the morning“.

So the morning came and download i did. To my surprise when i downloaded it i was offered the chance to download another version of the album, “Suicide Season: Cut Up”. It’s an album that consists of the same songs on the original only this time they’re all remixed by artists varying from the dude from Gym Class Heroes to The Toxic Avenger. Yes, the Toxic fucking Avenger. The man’s a legend (i’ve posted a few of his tracks before, mainly in the mixtapes section i think, if you haven’t heard him check him out) so when i found out that he had done a remix i had to get both “Suicide Season” and “Suicide Season: Cut Up”. Just by sheer coincidence the song that he remixes is, yes, my favourite track “Death Breath”. He keeps THAT riff yet somehow changes the style completely by sprinkling some of his electro magic over the track. The bite and snarl of the vocals marries well with the bleeps and loops that he chooses to mingle in among the heavy rhythms.

WARNING: THIS MAN WILL FUCK UP YOUR SONGS……IN A GOOD WAY OF COURSE

Tagged as bring me the horizon, emalkay, toxic avenger