Tired of the same old boring Christmas songs year after year? The same songs in the same style every December? Fear no more…..

This is a Christmas mix with a little bit of a twist. Nothing too “out there” or but different enough to keep you from going insane with the sounds of X-Factor garbage or other annually released festive “songs” ringing in your ears.

The mix starts off with an epic track from Mew and goes into some Christmassy pop and funk then we head into Christmas cover territory and mix it in with some fuzz from the Crocodiles, Dum Dum Girls and a boy/girl cracker (pardon the pun) in the form of The Hives and Cyndi Lauper. After that the mood drops slightly with some more sombre and thoughtful numbers….but wait, we’re rescued by E from Eels telling everything’s gonna be cool! Then Maps serenades all the mistletoe lovers with his version of East 17’s “Stay Another Day”, Band of Horses make us glow like Christmas trees with “The First Song” then Jonah, Chino and Grady give us their take on the Band Aid classic. After that it’s time to test the ears. Can you recognise all the different versions of of “White Christmas” that Corporal Blossom has mashed together? We end with 65daysofstatic take on the same classic song. And if your brave auditory system can get through the joyous white noise you’ll be rewarded with the little Christmas bonus of Arcade Fire having fun doing a version of “Jingle Bell Rock”. Full tracklist below.

Download it over at mediafire  An Alternative Christmas with SIT Wolf

or have a listen first on the Soundcloud link below and then head on over there and download it.

I made the mix 70 minutes long so that it will fit nice and snugly onto a CD and you can entertain/bore your family with it over Christmas dinner. I’ve already made a few CDs up for my friends and family.

ps. I’ve had to hold off the “Are Friends….” interview with Santa till during the week. He was busy this weekend, said he was wrapping stuff up or some shit like that. Fucking amateur.

I Hope I Become A Ghost

I’ve decided i’m keeping with the Halloween theme until it arrives so for the rest of the week there’ll be posts assosciated with Halloween type stuff.

It was the Phantoms turn yesterday so today it’s time to open up the old “do you believe in them or not?” debate….

I had fun searching through my hard drive for “ghostly” songs. I had a lot more than i thought i would’ve. I picked a select few and tried to keep the musical styles as varied as possible. Just right click and save as to download.

MP3: Pulled Apart By Horses – Get Off My Ghost Train

Some of my favourite ghost related videos…

My favourite song about ghosts (not in a pervy way! i’m not into paranormal sexual encounters!) is….

MP3: Maybeshewill – How To Have Sex With A Ghost

I have a feeling i’ve posted that video before but who cares. It’s worth it for the memories.

Tomorrows post will be Zombie related. Be sure to come back and have a peek…if you’re not too scared .

Asleep For Days, Awake For Nights

I know it’s been a while since i last posted but it’s been an eventful few weeks. I’ve had to deal with a lot of overtime at work which has it’s good and bad points.

Good points – lots of money at the end of the month.

Bad points – over tiredness (i can’t sleep) and an almost non existent social life between Monday and Friday.

Over the past week or two i’ve also been busy sorting out my new house. Yes, i eventually got a flat. I’m eventually moving out into the big bad world on my own. Well, technically not on my own, me and Gustav are moving in together. It’s something we’d planned for years and now it’s taken shape. We move in on the 4th of May.

I’m writing this post at 3am as i get ready to leave on a 10 hour drive from Glasgow to the South of England. I’m going on a kinda mini holiday/music festival trip. Should be fun.

I obviously won’t however be able to post when i’m away but i have lots of posts planned and ready for when i come back (next Tuesday). I’ll squeeze in a Six Mix and a Video Dose before the end of the month and there’s also another interview for the “Are Friends Eclectic?” section which is just about ready to be be published. Add an upcoming Weekend Mixtape and a mini review of the year so far and preview of what’s still to come in 2010 and that makes for a busy blog for when i get back.

For the moment here’s a handful of random tracks that i’ve been listening to a lot lately.

Also if you’re looking for an interesting read you could do worse than have a look at the following blogs…….

On the random side of things…

Something Wicked This Way Comes

This is a special Halloween mixtape, feel free to download it if you want. I threw it together this afternoon in the midst of a hangover. Apologies for the quality of the track “Dragula”. The bitrate was really low and i only realised halfway through the mix. I would have left the track out if i’d known but i recorded the mix all in one go and made the mistake of not checking the quality of the tracks first. Like i said i was hungover and it was a last minute thing. I just had a quick browse through some of my music files and took the songs i thought to be most apt for a Halloween mix.

MP3: Someone’s In The Wolf – Something Wicked This Way Comes Mixtape

Band of Horses – Is There A Ghost?

And a few videos…

After last Mondays top 10 animal related song titles we move swiftly on this week to the top 10 band names with animal references. There was a lot to choose from and in the future i may make another list of animal influenced band names. Picking 10 was quite hard as there are a lot of bands i like that somehow seem to have animals in their names. But here we go….

This Monkeys Gone To Heaven 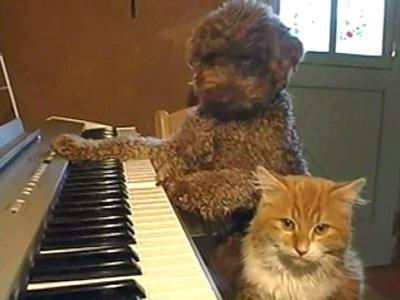 And thats it for another Monday list. Till next week……..

True Love Waits and The Weight of True Love 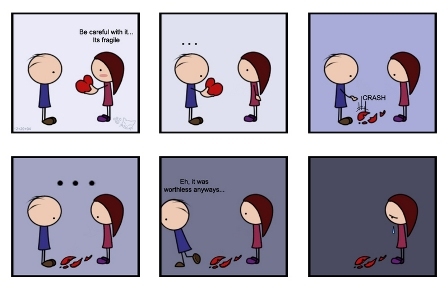 The first bunch of songs are ones of loss, hurt and memories. The usual suspects like Jeff Buckley and Bon Iver are in there but there’s a few others that i thought would fit in quite nice. I’m not Coldplays biggest fan but even i can’t deny “The Scientist” is a touching ode to lost love. The Twilight Singers went for an orchestral background and a boy/girl conversation type song on “Number Nine”.  Whereas “No One’s Gonna Love You” by Band of Horses and “Maps” by the YYY’s are more stripped back but no less haunting. The Postal Service also go for the boy/girl conversation point of view on the ethereal “Nothing Better” whislt managing to keep their trademark bleepy sound. Mystery Jets, Chairlift and Bloc Party bring an indie touch to the mix with tales of bruised love (literally) and broken dreams . Frightened Rabbit’s song about “getting your hole” (as they so delicately put it) offers something a bit more awkward and an altogether different outlook on finding love or thinking you’ve found love. And then there’s the classic break up song by Fleetwood Mac. “Go Your Own Way” was written and recorded just after band members Lindsey Buckingham and Stevie Nicks broke up and the tension and emotion is clear for all to hear as they share vocal duties.

The next trio of songs are the polar opposite of the ones above. Instead of  getting you down or making you feel sorry for yourself these songs might make you feel better about a break up. From the slightly sarcastic and provoking “I Never Wanted You” by Headphones, right though to the pretty blatant “fuck you” blasts from The Avalanches and McAlmont & Butler.

The last song doesn’t really need any description. One of the most simple but moving songs ever. Probably something to do with the fact that Thom Yorkes vocals still sound so fragile when he sings live.

And thats it for my first real post. Don’t worry they won’t all be this doomy and gloomy. It just happens to be one of those days today.